A Short Tour of Portland, Oregon by Bicycle 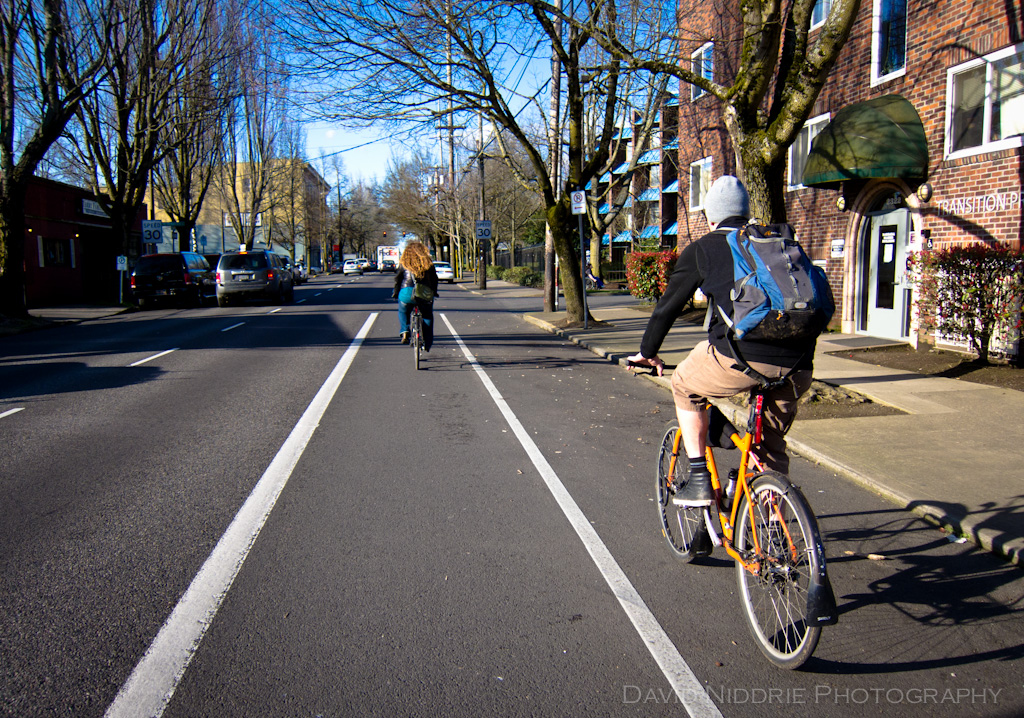 Riding up the bicycle corridor of Williams Street, heading north.

I had a great opportunity to check out Portland, Oregon a few weeks back when I went down with Mia Kohout & Molly Millar of Momentum Magazine to attend the Pedal Nation PDX Bicycle Expo. We went a day early and met up with Nick Sande, a friend of Mia’s and a new friend to me. He supplied us with Surly bikes & our first IPAs of the day and off we went into the warmth of the spring sunshine. After a short tour of the NE, we stopped at Joseph Ahearne’s studio and I took a Work Truck out for a spin. It was fantastic to ride and was even better when Joseph got on the front rack for a jaunt around the block. This bike is serious for carrying cargo and feels just as nimble with or without a heavy load.

Next up, we rode to Portland Design Works for a visit with Dan and a look at their space. On the rooftop for a beer, our timing was right to watch the ‘bicycle rush hour’ pour by on Williams Street below. It was an inspiring sight to see so many riders commuting to and from work. A stop at Hopworks Urban Brewery’s new BikeBar was a must, but we had a wait, so next door to Lompoc Brewing we went. Delicious ales on tap here. Back at HUB we were amazed at the local frame builders on display – almost 40 of them I reckon, above the bar showcasing Portland’s incredible, diverse handbuilt bicycle industry. Also impressed by the 11 organic beers on tap – that Secession Cascadian Black IPA is so good.

Later on we rode to the The Bye and Bye on Alberta Street for some further beer exploration. Met up with a number of other bike friends and had a really fun time. The expo the next day came mighty early, but we survived…as always. Here are some shots from an afternoon of riding around NE Portland, Oregon. Click on the first shot to view large.

The Jupiter Hotel was home for those short nights of sleep.

Even a smaller restaurant like Farm has ample bike parking for their customers.

Brunch at the Doug Fir, looking across to the Galaxy.

The door of perception at the Doug Fir Lounge.

Bikes line the walkway up to The Lizard Lounge in downtown Portland.

My ride for the day was this one-of-a-kind Surly Traveller’s Check.

The view from a hidden ridge, overlooking Portland’s industrial NW.

Mia Kohout and Nick Sande, riding buddies for the day. Nick was a gracious tour guide and all-round awesome dude.

Mitch Pryor works on a frame in his studio in NE Portland.

I saw a Hostess outlet in my travels. First time for that.

Riding an Ahearne Work Truck with the builder Joseph Ahearne riding on the front to approximate 155lbs of weight. Awesome.

A look inside the bicycle building studio shared by Joseph Ahearne and Mitch Pryor.

A massive bowl for riders and skaters inside pdw.

Riding up the bicycle corridor of Williams Street, heading north.

….Bottles of beer on the wall at Hopworks Urban Brewery.

Mia takes on the delicious pretzel mug in the HUB Biker Bar.

An end of the night scene in front of the SpeakEasy in Portland.

The poster wall at the Doug Fir Lounge in the Jupiter Hotel.

2 thoughts on “A Short Tour of Portland, Oregon by Bicycle”